My dog and I were out walking along the Willamette River recently, and we came across a beaver sitting in the middle of the path. Flores was running ahead of me and he ran right up to what I thought at first was a log or a rock. When I realized it was a beaver, I quickly called him back, as he was by then,  doing a nose to nose with the animal...! I'd seen beaver only rarely and always just a quick glimpse in the water.

(yes, rather lame to take a movie of something not moving, I know...)

We have a ravine with a small stream behind our house and there are some beaver dams down stream a bit but I'd never seen the critters, they are after all nocturnal.
So what was this beaver doing sitting so still in the path during the middle of the day? After a little bit of reading up on beavers here, I decided that this must have been a 2 year old, leaving the home pond in search of his place in the world. I had read that beaver babies stick around as yearlings and help raise the next litter before striking out on their own.
About a week later, the Oregonian reported that a beaver was spotted trying to cross the road one night directly across the Willamette River from where we spotted our beaver. It was late at night and the police showed up and actually walked him to the safety of a nearby creek. I feel pretty sure, that was our beaver...

And coincidentally, a week later, my friend Cynthia sent me a package containing among other things, this very nice little beaver. And, he arrived just as I finished up brooch # 11. Thank you, Cynthia! 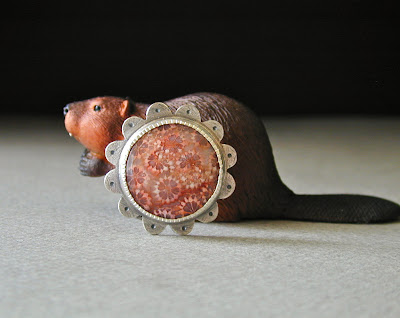 Brooch #11 in the etsymetal brooch-a-month challenge is a lovely round fossil coral. Set in sterling silver, I've added a simple tie tac type clutch on the back.

betsy bensen
Portland, Oregon
I'm a bench jeweler living in the Portland, Oregon area. My jewelry training began at The Oregon School of Arts and Crafts although my degree is in Art History. I really love what I do even though it sometimes feels as though there's not enough time in the day in which to get it all done...You can see my work in Portland at The Real Mother Goose (www.therealmothergoose.com), and at the coast find me at Imogen Gallery in Astoria (imogengallery.com). And I invite you to check out my etsy shop, betsybensen.etsy.com